Skeletons In Your Closet

Skeletons In Your Closet

It’s been an amazing season working with Blues Artist, Buddy Black. What began as a mutual appreciation of music and performance, evolved into a close friendship and production of an entirely new collection of music. Buddy has been the champion of Blues music and his guitars for many years. It is his passion for guitars and his uniquely huge voice that gave me a colorful palette with which to help paint this new collection of songs, one in particular, Skeletons In Your Closet. 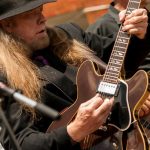 Buddy Black and I also share a penchant for certain television programming and films. It was through this interest that we enjoyed the Netflix series Peaky Blinders  and it’s theme music by Nick Cave. I fell in love with the edgy dark and saturated theme music and in the spirit of composition, I decided that Buddy and myself could do something that was as musically cinematic.

In my opinion, Buddy Black is a genuine rock star with an edge that truly comes from the heart. In me, my musical experience comes with classical training , world tours, and just about every genre of music this wide world has to offer. So I composed a cue as if I were scoring a film project. It was an organic piece with lots of wood drums played by wood mallets, a harmonium, a viola/ fiddle, and a solo contra basso. The progression was in a minor key with a brooding and dark feel. I gave it a quick mix and handed it to Buddy.

Once Buddy Black had heard the track, he commented on the minor key. I could tell he was moved by the feel and he commenced to writing the song. It didn’t take too long for Buddy to put his heart into this project and what he came up with was amazing. Along with his characteristically modest disclaimer of this being out of his comfort zone, Buddy played his vintage Martin acoustic guitar and sang what would become Skeltons In Your Closet. I was totally blown away! Buddy had captured the essence of the mood and vibe of the track completely and elevated it to a place that became regal and timeless.

The production aspect of Skeletons is the subject of another time. We mixed acoustic instruments with cinematic scoring tools to lay down a warm and saturated bed that supported a single voice recorded with a classic large diaphragm microphone through a modern interface with vintage emulation. The result is pure magic.