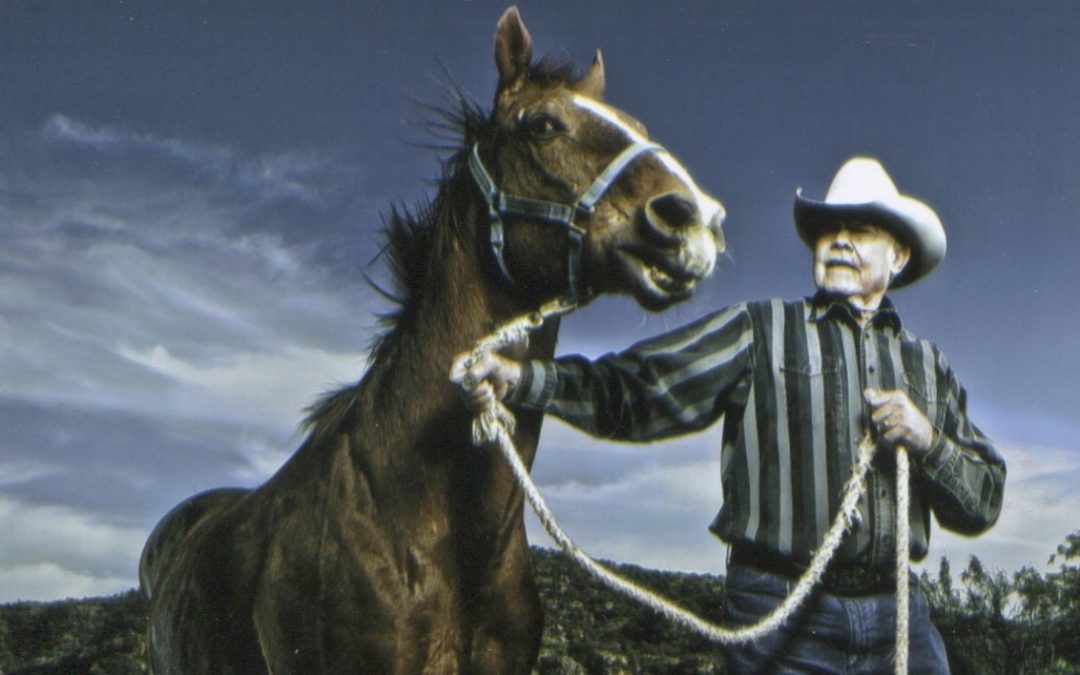 The National Cowboy Hall of Fame in Oklahoma City keeps a collection of J.P.S. Brown’s books. He received the first Will James Society’s Big Enough Award for literary achievement in the cowboy tradition in 1999. In 2003, he received Arizona Historical Society’s Lawrence Clark Powell Award for lifetime achievement in Southwestern letters.

He bought cattle and horses in Chihuahua, Sonora, Baja California, Coahuila, and Jalisco. Worked on a cowboy crew in Imperial Valley, California, then moved to Navojoa, Sonora in 1960 to buy cattle for American rodeo. Rode horseshoe trails of the Sierra Madre Occidental from Chinipas, Chihuahua to Sahuaripa, Sonora. Brown was one of the founders of the Navojoa charter of the Mexican National Charro Association.

His first novel, Jim Kane was published by Dial Press, N.Y. in 1970. Jim Kane was made into the movie Pocket Money with Paul Newman and Lee Marvin in 1972. Joe Brown never intended to write books. “I did not want to write,” he says, “I wanted to cowboy and be an artist at that.” But, while in Mexico, he came down with hepatitis. Recuperating at his grandmother’s house in Nogales, he started to write the stories that would eventually become Jim Kane in an effort to make some kind of living.

Next, he wrote The Outfit: A Cowboy’s Primer published by Dial, based on Joe’s true story of his cowboy work on Art Linkletter’s Lida Nevada ranch. This book has been optioned by A-List Hollywood talent. “We gathered 1,600-1,700 pound steers, some as old as 16 years old,” he says. “By December the weather turned bad, and those cattle just scattered and went underground, the country wasn’t rocky, so we’d take our bobtail trucks into the flats, go way up in the high country and bring those cattle down to portable corrals. It was more fun than a cowboy ever had.”

Other fiction: The Forests of the Night, Dial, 1974; Steeldust, Walker, 1986; Keep the Devil Waiting, Bantam, 1992; The Arizona Saga, (four books:) The Blooded Stock, The Horseman, Ladino, Native Born, Bantam and Doubleday,1989-1994; The Cinnamon Colt, Doubleday, 1996. A novel about Mexican border strife titled, Wolves At Our Door, was completed, May 2006, published by UNM Press. The novel, The World in Pancho’s Eye was published by UNM Press in 2007. Recently published books: The Spirit of Dogie Long, Serpentine, Chilton vs. The Center for Biological Diversity: Truth Rides A Cowhorse and Cowboys Fly: Book I by Make A Hand Publishing.

During 1977-2003, Joe worked in Tucson as a member of the Teamsters Union Movie Wranglers, providing cattle, horses, stunts and acting in bit parts in the movie business.

In the March 2008 Issue of the Arizona Cattlelog, in an article titled, “Writing About The Cowboy Way” Kathy McCraine’s writes, “J.P.S. Brown’s award-winning books are keeping the romance and reality of the working cowboy alive.”

His “Arizona Saga” books consisting of The Blooded Stock, The Horseman, Ladino, and Native Born, were based on stories his 100-year-old aunt told him about his ranching ancestors. His great-great grandfather William Parker came through Arizona in 1850 and was so taken with the San Rafael Valley that he decided to homestead there. His grandfather on the other side of the family, A.B. Sorrells was a horsetrader from Arkansas who came West, married William Parker’s daughter Melvina and homesteaded in Harshaw Canyon near Patagonia.

By the time Joe Brown was born in 1930, members of his extended family were running 30,000 mother cows and counted among their ranches the Ridin’ the Range Buena Vista on both sides of the Mexican border, the Rail X at Patagonia and the Oak Bar on the Mexican line. “We were more like Sonorans,” he recalls, “and still are more attached to the Mexican tradition. We were all bilingual, and I kind of grew up thinking I was a Mexican.”

Brown’s father, Paul Summers came to Arizona in 1914 at the age of 12 with a bunch of Texas cattle bought by Nogales rancher Quince Leatherman. He stayed to marry Mildred Rex Sorrells, who inherited a share of the Sorrells cattle and they bought the Rock Corral Ranch near Tubac. After his parents divorced and lost the ranch in the Great Depression, his mother married a rancher and cattle trader named Vivian Brown. Brown kept his biological father in his two middle names, and became Joseph Paul Summers Brown.

“After he lost the ranch, my dad went to work in Mexico for Les Woodell, who was a famous cowman in this area,” Brown says, “They called him ‘Cabezon,’ or ‘Big Head,’ because he was a little guy and wore a big hat.” At five, little Joe Brown was already following his dad horseback gathering cattle in the Sierra Madres of Mexico. One of America’s first great film cowboy actors, Tom Mix, gave Joe his first chaps at age 8!

Joe knows the joys and heartbreaks of the cattle business like few writers today because he’s been there. He has spent a lifetime cowboying on both sides of the Mexican border, trading and crossing cattle from Sonora, Mexico, gathering wild cattle in Nevada, buying ranches — losing them, due to the rancher’s two eternal enemies, drought and bad markets.

“I made a mistake,” he admits now. “It was droughty and too little to make a living on. I thought I was going to write there, but all of a sudden cowboys fell out of favor with the New York Publishers. At the same time, I had 2,600 cattle to cross at the Mexican line when the Mexican government shut it down. I had to turn them around and ended up losing 20 percent of them to drought. I was pretty sick of Mexico.”

He wound up losing his ranch, but over the years, he continued to write of his own life and cattlemen on the southern Arizona border. “I don’t cowboy so much anymore,” Brown says, “but as a cowboy, I often knew the privilege of being way out alone in great country doing work that took risk, instinct and courage, and I wish everybody could know more about that aspect of a cowboy’s life. Now I write more than ever about the Cowboy Way.”